I’m not sure if you remember the last one in 2008, but recessions can be Bad News Bears. Not too many people are truly ready for it to happen and being unprepared can be devastating to you personally and to your financial plans. If you go into a recession with a plan, though, you can make it out like a king. Baron Rothschild said, “buy when there’s blood in the streets, even if the blood is your own.” What this means is buy when the market seems as though it’s at its worst because the winners usually win when they’re buying, not selling.

In 2008, people were panicking, and the banks were falling like dominos – Bear Stearns, Lehman Brothers, Freddie Mac, and Fannie Mae were big names that inevitably were purchased by the government. People only wanted to do one thing: pull their money out of the banks and the stock market to salvage whatever money they had left. 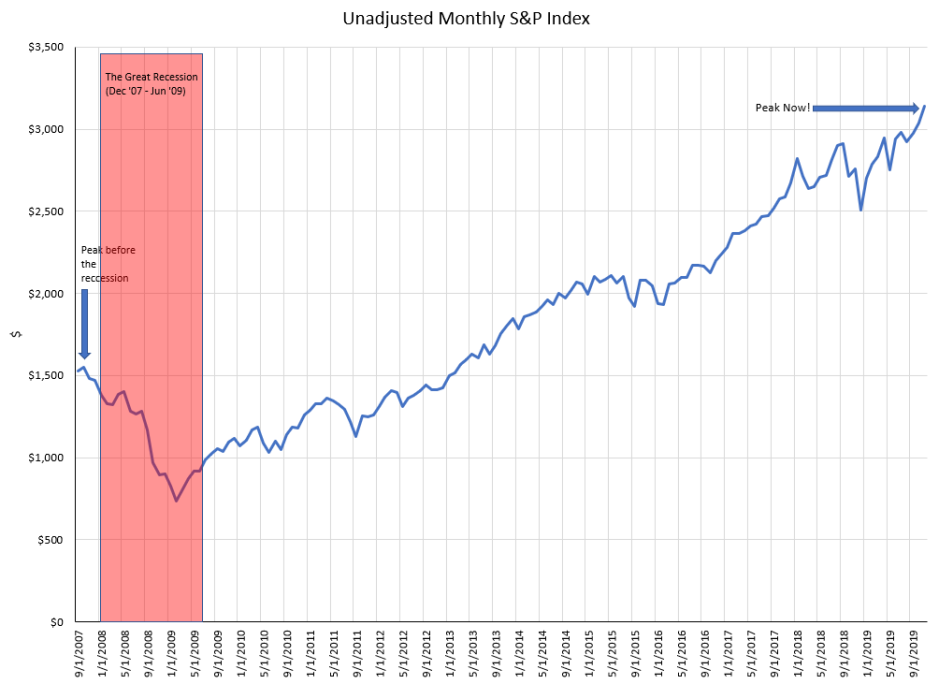 So, how do you prepare for this? You can keep a portion of your money in cash and invest it at the point you think is the market low. Another good way of getting these benefits without doing a ton of work is to invest a fixed amount every month. This means that you will get the highs and the lows but averaged together you are still going up. Just like in the example above, even if you bought at the height of the market today, you still double your money if you keep it in. The only people who truly lost were those who took their money out and missed out on all the gains along the way. They essentially sold low and bought back in high.

Personally, I put a fixed amount into my 401K and Roth IRA every month. Then I keep another 20% of the money I would have invested into these vehicles in an account for when I think the market is going to be down. So, if I were to invest $500 a month, I would put $200 into the 401K and IRA and keep the extra $100 in a high-yield savings account until it was ready to be invested at a market downturn.

If someone says they know when the market is going down, they’re probably lying or just guessing. The best thing to do is make continuous investments in the market and not take your money out. If you think you can time the market, which even the greatest investors like Warren Buffet can’t do, you could keep a portion of your money in cash. Then, when you think the market is at a low, use the money you saved to buy. Make sure you are always doing your research on the companies you buy – this will be the only way you can protect yourself from buying companies that may not make it through a market downturn. Try using sites like Wallmine or Seeking Alpha these sites can help you a ton in your investing journey.

and get the book as early as tomorrow!
Disclaimer: this is not investment advice. This is for information purposes only.